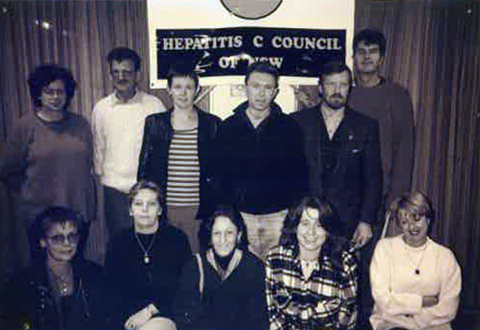 Hepatitis NSW turned 30 on November 21, 2021. To celebrate our inception, growth, and three decades of service and support to communities affected by viral hepatitis, an event was held on December 13, giving the community, our members, supporters, volunteers, partners, and staff – past and present – an opportunity to mark the occasion.

Attended by our founding patron, Professor Geoff Farrell of Westmead Hospital, the evening included congratulatory messages from funders, collaborators, and our familial national, state and territory organisations. There were also several open mic sessions for the sharing of memories, of which there were many.

Initially formed and led by Ms Audrey Lamb (OAM), to provide community information and support for people affected by the hepatitis C virus, we have since grown to also include community appropriate efforts around hepatitis B.

While different from each other, both hep B and hep C are viruses that can cause significant liver damage if not given appropriate treatment. Regardless of the changing testing and treatment landscapes for either virus, we have always worked to educate, support, inform, and advocate – to improve health care access and outcomes for people, and reduce stigma.

Our achievements over 30 years include the establishment of a wide range of highly regarded services, programs, collaborations, campaigns, and resources – most notably, our Hepatitis Infoline (1800 803 990), Prisons Infoline, and website (hep.org.au) have been the cornerstones of these efforts. Our Speaker Program – which trains people affected by viral hepatitis to talk publicly of the social, emotional, or medical-related aspects of their experience of living with hep C or hep B – has been another cornerstone of our organisation.

“We stand on the shoulders of the giants who rallied the community; gave it a voice, a face; and created this organisation,” said Hepatitis CEO, Mr Steven Drew. “Those giants are the past leaders of the viral hep community.”

“They stood tall and provided us with the means and drive to make viral hepatitis elimination a potential reality. From them, we can not only learn the lessons of the past but also look to the future and apply what worked so we can best achieve our vision of a world free of viral hepatitis. It is a vision that can become reality in less than a generation.”

Much has been achieved in our thirty years, however much remains to be done before viral hepatitis can be regarded as having been eliminated. It is an ultimately achievable goal, even recognised as possible by both Australian and New South Wales governments.

It is our sincere hope that, by our 40th anniversary, both hep B and hep C are no longer significant community health issues.

You can find out more about how to get involved and help us make a positive change for the future here.

Your ticket for the: Media Release: Hepatitis NSW – 30 Years of Support and Service to the Viral Hep Community