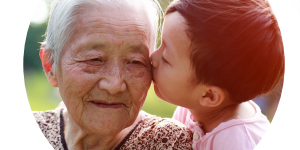 In the lead up to this month’s Federal Election, Hepatitis Australia has released the Leading the National Response to Viral Hepatitis paper. This important document delivers a message to Australia’s political parties, outlining the action needed to progress Australia’s response to hepatitis B and hepatitis C, and to ensure we achieve the national and global elimination goals which the Australian Government has previously committed to.

Hepatitis Australia is asking all major parties, as part of their 2019 federal election commitments, to clearly state their intentions to provide additional and targeted funds to address not only the gaps in current responses to hepatitis B and hepatitis C, but also the opportunities for action that are outlined in the paper.

Hepatitis NSW strongly supports the actions and requests outlined in the paper and has written to NSW House of Representative Members of Parliament with a prominent role, or active interest, in community health issues. As Australia readies itself to decide our national government for the next three years, it is vital to shine a spotlight on these important community health issues and ensure they are not lost in the mix.

There remains much to do, and any delay in meeting the needs of the more than 400,000 people nationally who are affected by hepatitis B and/or hepatitis C will make the achievement of the nationally agreed targets by 2022 increasingly difficult. 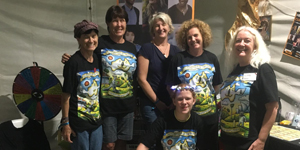 Hepatitis NSW had a major presence at the Byron Bay Bluesfest over the Easter long weekend, sharing a stall with a number of other community and government partners. As is well known, hepatitis C has had a considerable impact on people associated with the rock and blues music industry. The 30th Anniversary Bluesfest gathered over 100,000 music fans – including people with risk factors for or who have hep C, mostly being over 50-year-old baby boomers into rock music and who have injected drugs in the past. Hepatitis NSW coordinated a much-coveted charity stall space, offering Dried Blood Spot (DBS) self-testing for hepatitis C and HIV to the festival crowd, including fans, musicians, roadies, and event staff.

We collaborated with Lismore Liver Clinic, Mid North Coast HARP, Lismore Sexual Health, and ACON Northern Rivers to run a stall promoting hepatitis C information, treatment and cure, and encouraging DBS HCV and HIV self-testing. DBS tests are designed for people who haven’t recently tested, offering a quick self-test, with results given confidentially by specialist staff via text, phone, or email. Making hep C testing easy-to-access, on-the-spot within a music festival – with the combination of nurses, educators, counsellors, and community organisation staff acting as a bridge assisting with the online registration and testing process – was a first.

With over 100,000 people at Bluesfest over five days, there were 22,000+ passers-by daily. The stall had 500 visitors with 26 registrations and 12 tests conducted within the privacy of the stall. People who received positive hep C results were followed up for confirmatory testing and treatment. Over 300 people were engaged for hep C education, information, and health promotion services, and numerous hep C resources were distributed, which promote hep C treatment to friends and family after Bluesfest.

Since many people attending the festival would have been using their phones to access program/timetable apps and social media, we also promoted the stall via Facebook. Using geo-location to target a 40km radius of Byron Bay, the post reached almost 6,000 people with 468 engagements (comments, shares, likes).

People visiting the stall were overwhelmingly positive about us being there. Many visitors to the stall had lived with hep C, and had been through more than one type of treatment. About one-third were friends or family of people living with hep C, some reporting they did not know about the cure, mainly due to stigma and silence about hep C within the family. Some reported their loved ones had died of hep C. One family came through – mum, dad and adult child – all treated and cleared; they expressed joy and gratitude for the work we are doing and donated.

Many people who had lived with hep C and recently treated and cured visited and enthusiastically shared their news of cure. Most were in the 50+ age group. People commented on the stall de-stigmatising hepatitis by our presence: 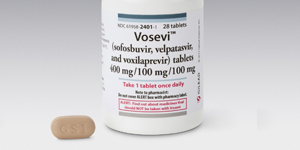 Vosevi, a new direct acting antiviral treatment (DAA) drug, has now been listed on the Pharmaceutical Benefits Scheme (PBS) and became available to the Australian public from 1 April. It is intended to be used as a rescue treatment for the small percentage of people living with hepatitis C, regardless of genotype, who have so far been unsuccessful using other DAA treatments.

As with other DAAs, Vosevi is taken orally as a single tablet, once a day, for 12 weeks. Currently it is the only pangenotypic re-treatment option available for many of the 3.5% of patients who did not achieve a cure with other DAA treatments.

Vosevi’s addition to the PBS, means healthcare professionals now have a range of treatment options for the different needs and stages of their patients with hep C. Like other DAAs, its usage results in no, or few, side-effects for the great majority of people.

Hepatitis NSW welcomes the listing of Vosevi on the PBS, and hopes that this will help move us closer to the goal of achieving hepatitis C elimination in Australia by 2030. 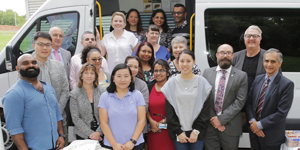 An exciting innovation, this mobile liver health clinic, staffed by nurses and other health professionals from Westmead Hospital, has begun to visit services in Western Sydney where people with hepatitis C can easily access blood and Fibroscan testing and continue their journey to better liver health and cure.

Live Hep C Free, Hepatitis NSW’s peer program – which supports people with hep C who also inject drugs into testing, treatment, and cure – has begun to work alongside clinical staff in the van as they visit services in homelessness, drug health and youth settings.

Volunteering to make a world of difference 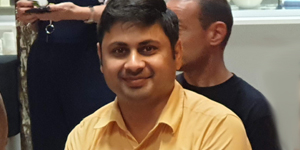 (This article was written by Satyajit Patra, pictured right, who is the Hepatitis NSW Board’s Volunteer Representative)

While volunteering provides substantial benefits to society, importantly it also provides significant benefits to the volunteers themselves. Volunteering can be rewarding for someone who chooses an area of genuine interest, where they can utilise their existing skills or are looking to develop new skills. Volunteering can help a person improve physical and mental health, and gives them an opportunity to enhance social skills and networks.

It has been more than a year since I started volunteering with Hepatitis NSW and it has been a great experience. During this time, I have met many other volunteers there. I came to Australia from India in 2018, and I was looking for an opportunity to utilise my sixteen years of legal expertise. I knew it would be hard to get into the legal profession in Australia, but also that waiting for the ideal job in that field would be counterproductive. While looking for volunteering opportunities I found the Hepatitis NSW website; their objectives appealed to me, and I started there soon afterwards.

One of the first tasks I tackled was a review of policies and procedures; to simplify them into easy to understand language. That process helped me to understand local Australian laws and helped me develop new skills. I also participated in the mail out of resources, data entry, and assisted in organising events for Hepatitis NSW. Being associated with the organisation over time also helped me build my networks, which proved to be useful for my career growth.

For instance, I received paid work filling a casual Administrative Officer vacancy there for a short period, plus I connected with a prominent solicitor also volunteering for Hepatitis NSW. He offered me the opportunity to complete my work placement training under his guidance. Recently, the Board of Hepatitis NSW elected me as the Volunteer Representative to the Board.

Volunteering with Hepatitis NSW has provided me with a platform to learn new skills such as working with Survey Monkey, efficiency management software, more insight to Microsoft Word and Excel, and enhance my management skills.

There are many volunteers who give their time to Hepatitis NSW, and they all have their own story to tell. We share a lot in common, such as volunteering to keep us engaged, contributing to the community for a great cause, and to enhance and learn new skills.

The last Australian Census shows that 31% of the population volunteer for the benefit of communities across the country, making a huge annual contribution of billions of dollar to the economic and social good, and making a world of difference.

To learn more about volunteering for Hepatitis NSW contact: 02 9332 1853 or info@hep.org.au 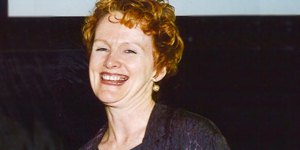 Hepatitis NSW pays tribute to the wonderful life and work of Ms Elizabeth O’Neil (pictured right) who passed away on 28 March 2019.

As Population Health and HIV and Related Programs (HARP) Manager for the Nepean Blue Mountains Local Health District, Elizabeth was a woman like no other in the world of HIV, sexual health, viral hepatitis, and population health.

She had a remarkable ability to think at a population level whilst still imagining the human experience of navigating relationships, sex, and drug use.

The fiercest of HARP managers, she was a passionate leader, fabulous ally, a wonderful friend, and a formidable foe.

Elizabeth leaves a legacy of pushing us all to think harder, to be more creative, more flexible, and more responsive to the needs of populations. 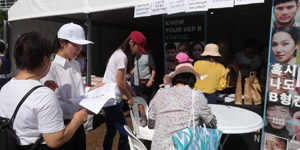 Over 200 people participated in our Hepatitis B Quiz, and took a short questionnaire aimed at increasing awareness of the importance of testing for hep B. The Hepatitis B Free team from Sydney University also held point of care testing which saw a record 63 people tested.

These stalls are an ideal way for our Korean Project Worker to connect directly with the broader Sydney Korean community, and deliver culturally appropriate messaging around hepatitis B.

Thank you to everyone who contributed their time towards making this day a huge success!

Your ticket for the: The Champion Community: Issue 72