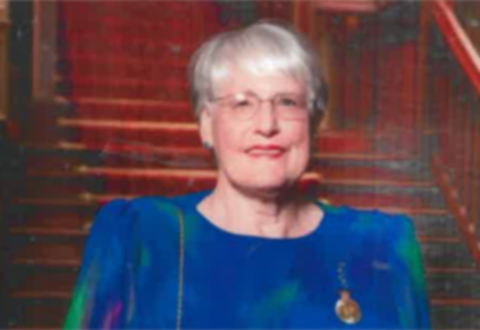 Audrey Lamb – the founding President and Life Member of the Hepatitis C Council of NSW (now Hepatitis NSW) – was a true champion of the hepatitis community in Australia. Her wisdom, passion and vision shaped the nature of the hepatitis community sector. Sadly, she passed away on March 6, 2008, following a short and very intense battle with cancer.

Hepatitis Australia interviewed both Audrey (pictured, right) and Professor Geoff Farrell, in 2007, about their friendship and work over the previous 15 years. Their hard and focused efforts in the early 1990s helped pave the way for the establishment of hepatitis councils across Australia. A special friendship grew, based on mutual respect and the shared value of helping others wherever they can.

For many years Audrey had been experiencing tiredness, vague nausea, an irregular bowel, and a poor functioning liver. In September 1990, Audrey was finally diagnosed with “hepatitis C“.

Unaware of exactly what hep C was, Audrey’s situation was made all the worse by the lack of support and knowledge in the medical community. One doctor told Audrey it was a “good thing you have antibodies in your blood – that means you’re now immune to the disease” while another said it was “a very serious disease leading to cirrhosis and possible death through liver cancer”.

With her first grandchild due in December of that year, Audrey was desperate for some basic information on how this virus was transmitted, and how infectious it was, but no information or support was forthcoming. She was told to try and get an appointment to see Dr Farrell who was leading research into the hepatitis virus at that stage.

Dr Geoff Farrell (now, Professor) was working at that time at the Westmead Hospital in Sydney. The two decided that something needed to be done about the inadequate state of hep C information, care and support, and together they were instrumental in creating the first Australian hepatitis C support group.

Along with others, Audrey wrote the first hep C information booklet available in Australia and coordinated a national network of volunteers from the affected communities. She organised a 4,000 signature petition to the NSW Health Minister – delivered in May 1993 – calling for the NSW Government to initiate an antidiscrimination focused community awareness campaign, and for resourcing and support for the tens of thousands of people in NSW already living with the virus.

An information helpline was established, but with no office space, callers were directed to Audrey’s own home, where she stayed up all hours answering calls and providing information. Geoff was always ready to provide the most recent research information and help any way he could – and so was formed a strong friendship.

In the following years as that friendship grew and developed, so did the support groups, until today when hepatitis councils are established in every state and territory providing people with information, education and support services.

Audrey was fittingly honoured during the 2007 Queen’s Birthday celebrations, receiving an Order of the Medal of Australia (OMA) for her public health work on behalf of the communities in Australia affected by hep C. She has been remembered every year since her passing through the Audrey Lamb Community Forum – held in conjunction with the Hepatitis NSW (formerly The Hepatitis C Council of NSW) Annual General Meeting. The Forum presents guest speakers talking to viral hepatitis issues of note within the community.

Professor Farrell became Director of Gastroenterology and Hepatology at The Canberra Hospital, and Professor of Hepatic Medicine at the Australian National University Medical School. He is recently retired.

Your ticket for the: Remembering Audrey Lamb – founder of Hepatitis NSW