Hepatitis B health promotion and testing for Chinese communities in Hurstville

A very successful hep B testing, health promotion and education event was held last month at Club Central, Hurstville in Sydney’s south, with over 100 people – aged between 40 to 60 years from Chinese Australian communities – attending. Full hep B blood tests and liver health scans were provided by clinical staff from South Eastern Sydney Local Health District, and from Virtus Health.

Outgoing CEO of Hepatitis NSW, Stuart Loveday opened the event with an acknowledgement of the traditional custodians of the land at Hurstville, the Biddegal people, and extended a warm welcome to the people from the local Chinese community, paying tribute to their culture. Stuart emphasised the importance of hep B testing, regular liver health monitoring and treatment, where needed, as essential liver-cancer prevention strategies. He encouraged people to talk about hepatitis B with their family and friends in order to raise awareness of this health condition that, sadly, contributes significantly to the only form of cancer that is on the rise in Australia.

Free hepatitis B blood tests and liver health scans using two fibroscan machines were available for all adult community members who wished to participate. Two blood collectors from Virtus Diagnostics & Pathology and three Clinical Nurse Consultants from St George Hospital and South East Sydney Local Health District (SESLHD) HARP unit were on hand to screen 46 people for both blood tests and liver scans. This is an amazing achievement by this deeply committed team of clinicians. People who were not able to be screened that evening were provided with free referrals to St George’s Hospital Liver Clinic.

While this was taking place, the 25 children who attended with their parents, were being looked after and entertained with origami in an adjacent room. After dinner, Bill Jiang – Sales Manager, Soya King – delivered a Hep B and Chinese Culture Quiz which proved to be a lot of fun. Hepatitis NSW thanks the SESLHD HARP Unit for providing funding to run this important awareness raising and liver health event. We also thank the five students from Macquarie University who assisted with language interpretation, Chinese Australian Services Society (CASS) for their support with recruitment. We were delighted to work with Ms Defeng Jing, a doctoral candidate with the Centre for Social Research in Health at UNSW, who is carrying out vital social research within the Chinese community and with people living with hepatitis B.

“Thank you and farewell”… Stuart Loveday retires from Hepatitis NSW

It is with sadness, but with a great deal of hope and optimism, that I say farewell and thank you, to the communities of people in NSW affected by hepatitis C and hepatitis B, and to the very many friends and colleagues with whom I have worked for the past 25 years.

When I joined the Hepatitis C Council of NSW in October 1994, as Executive Officer, working alongside a team of dedicated and skilled volunteers, little did I realise that my professional journey and career ahead would be so fulfilling, enjoyable and long lasting.

As a 40 year old immigrant to Australia, newly arrived from London, UK, I was delighted to be selected to head a small organisation that had such a huge responsibility to work with, and on behalf of, all people in NSW living with or affected by hep C.  Later, we also worked hard to help improve and help save the lives of people living with hepatitis B.

The first I’d heard about “non-A, non-B hepatitis” (it was named hepatitis C in 1989) was from a charismatic nurse in a sexual health clinic in a London hospital in 1981. He loudly educated the whole waiting room while I was waiting for the first in my series of three vaccinations to get immunised against hep B, saying that there is of course hep A and hep B, but there is this other kind of hepatitis that is very serious . I had no idea then that viral hepatitis would become my calling and passion.

So many people from all walks of life have contributed so very much to the progress that has been made in working towards hep C elimination. Most importantly, they are the people living with, or who used to live with, hep C. The work of Hepatitis NSW’s members, staff, Board members and our volunteers has been crucial, as has that of nurses, doctors, and other health and health promotion experts. Important contributions have also come from social and clinical researchers, epidemiological and basic science researchers, and our policy colleagues and other staff at NSW Health. I’d like to also acknowledge the valuable work of staff in NSPs and in Aboriginal health, and work colleagues in our peer and partner NGOs, in particular, Hepatitis Australia. Our colleagues in the pharmaceutical sector have also played a major role.

Having worked alongside so many dedicated, passionate skilled and experienced people over the years, I have felt nourished, energised and empowered by your drive and your support.   I thank and pay tribute to you all.

One person, however, among so many, stands out for me: a man I would like to publicly acknowledge and thank; a man who has been a rock in the sometimes turbulent waters of the community response to hepatitis C in NSW and in Australia.

Mr Paul Harvey, our Manager of Information and Communications, served as a volunteer on the Board of our community based, non-government organisation and charity, when I began my role twenty-five years ago. Paul has calmly and so wisely steered the most visible community aspects of our work: our magazine Hep Review, all our many information resources and publications, our websites; our advocacy: in short, our community base.  Thank you, Paul, for your guidance and steadfast service to the scores of thousands of people whose lives you have touched.

I welcome our incoming CEO Mr Steven Drew, who brings to Hepatitis NSW a wealth of leadership skills and experience gained in the community, NGO and government sectors.

Come the end of October I will retire from Hepatitis NSW, travelling to spend time with family and friends. In 2020, I will volunteer, at a slower pace, in the areas of prisoner health and human rights, and I look forward very much to working with and for people in NSW living with hepatitis B.

For now, farewell and thank you. 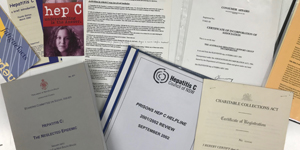 As part of my volunteering, I had the opportunity to work on the project of archiving Hepatitis NSW’s historical documents. My thanks to Joan and Laila from Hepatitis NSW for including me in this fascinating project. I was quite excited to have the chance to explore the history of Hepatitis NSW and to organise these historical documents into archive boxes so that this history is not lost. I am thankful to volunteers Susie and Aarti for joining the team and helping us with the project.

The first day we were quite overwhelmed by the volume of papers in front of us, however we planned and divided the documents into various categories and that made the herculean task simple. Duplicate research papers/magazines/ journals were sent to be shredded and recycled, magically easing our work.

Organising the documents into chronological order was the final step of the project. Arranging the documents in order not only narrates the long history of Hepatitis NSW, it also shows the effort made by past members, staffs, volunteers to nurture the organisation to present day shape. 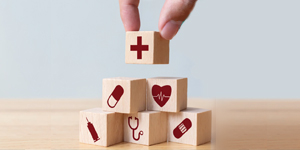 The NSW Hepatitis C Communication Strategy 2019-2020 will not, unlike in previous years, be rolled out into the general community. Rather, our aim will be to actively involve communities of people who inject drugs, utilising peer promotion and word of mouth, in addition to traditional channels.

Our aim is to help LHDs reach their hepatitis C elimination goals. We need to:

The most direct treatment pathway is the most local treatment pathway. We want people to talk with their local nurse/GP/health care worker. We want the worker to know of local referral options for DAA prescribers who will actively support people through their DAA treatment journey. 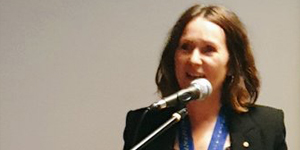 On January 26 this year, Annie Madden was awarded an Order of Australia (AO) for her decades of work and dedication to promoting the health and human rights of people who use drugs. “Dame” Annie was recognised for distinguished service to community health, as an advocate for the disadvantaged, to policy development, and to human rights.

Late in September, Hepatitis NSW staff attended a community party celebrating her award and work, and heard from colleagues, supporters and activists about her leadership, tireless determination and courage in the face of the high personal cost of being a voice for drug users. There were many accounts of the impact Annie has had on drug law reform and improved rights for drug users in NSW, Australia and internationally.

The party brought people from diverse fields around the country, including Tony Trimingham OAM from Family Drug Support who spoke of the personal pain Annie experienced in advocating within toxic settings for the rights of drug users, and Julie Bates AO from the sex worker and drug user rights movements who broke the law alongside Dr Alex Wodak when they set up the first NSP in Australia.

Gino Vumbaca, President of Harm Reduction Australia, MC’d and shared unique anecdotes. Professor Carla Treloar who led Annie’s nomination, shared her deep admiration for Annie’s personal drive in fighting the stigma and discrimination experienced by drug users. Fiona Patten, the Melbourne MP who drove law reform enabling the Medically Supervised Injecting Centre (MSIC) in Melbourne, Ingrid Van Beek (who set up Sydney’s MSIC) and her husband Geoff Gallop, ex-WA Premier and newly appointed member of the Global Commission of Drug Policy, attended, along with many other luminaries from the research, scientific, medical, legal and community-based HIV/blood borne virus sector. All joined to celebrate a person who has achieved so much against the odds.

NUAA staff spoke of the enduring friendship that had developed with Annie over years of complex, challenging work addressing the needs of people who use drugs. Charles Henderson, partner to Annie and NUAA’s Deputy CEO, hosted the event with great hospitality, an extraordinarily groovy play list. He gave a heartfelt speech as a witness to Annie strengths, and her genuine practical care for drug users, stating Annie always “walks the walk”.

Annie described feeling somewhat conflicted in receiving an award bestowed by ‘the Government’ which represents authority, the mainstream, and hence the law, however, recognised that it also acknowledged that people who use drugs have a rightful place at the table and that the issues she works to address could be furthered from the accolades and media attention that the award gave.