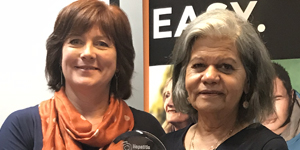 Hepatitis NSW is delighted to announce that Ms Bev Tyson is the 2019 winner of our Annual Cheryl Burman Award, which acknowledges outstanding work or achievements by an individual or team in NSW within the viral hepatitis sector.

Bev is a committed, highly respected advocate, community leader and clinician. Bev (pictured right (with Margie Crowley, left)) has led and developed the Dubbo Sexual Health Service into a high performing team, delivering outcomes through clinical excellence and innovative services to at-risk communities across a large catchment area. She has attained specialist competencies and used these to pursue extensive and wide-ranging partnerships in health promotion and clinical services that extend the role and reach of her work.

Highly respected by Aboriginal and non-Indigenous clients, staff and services, Bev provides an important link to Aboriginal people for services that are traditionally difficult to access due to shame, stigma, and discrimination. She challenges the status-quo of service delivery models to challenge problems, particularly where it relates to remote areas. Bev achieves her goals by harnessing her personal commitment, values, and respect for the community, as well as her quiet determination, energy and initiative.

Hepatitis NSW congratulates Bev, and thanks all nominees for this year’s award. Once again, the applications we received demonstrated strong leadership and initiative in the sector. 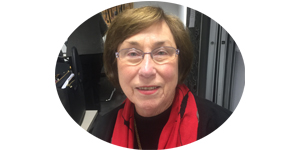 It was with great sadness that Hepatitis NSW learnt of the passing of our highly respected and much valued Board member, Anne Lawrance, on Monday, 2 December 2019 following an extended illness.

Anne joined the Board of Hepatitis NSW in 2013, establishing herself as a passionate, committed and active member. She held several Board roles, most recently participating on the Board’s Human Resource and Remuneration Committee. Anne also convened, for a number of years, the panel responsible for selecting and recommending the recipient of the annual Cheryl Burman Award.

Anne graduated as a pharmacist, going into community pharmacy with a variety of roles including becoming a pharmacy owner. After 18 years in community pharmacy, Anne took her knowledge, skills, and experience to the public sector, joining the Pharmaceutical Services Branch of NSW Health. She left NSW Health, in 2012, after almost 20 years’ service.

In addition to joining Hepatitis NSW in 2013, Anne became an active member of the North Sydney Medicare Local Education Committee.

Anne was a true and fine leader, a strong and wise woman, a great friend to Hepatitis NSW and had a wonderful respect for all other people. Her genuine warmth, guidance, huge knowledge, wisdom, vast experience, her sparkling, quiet wit, her great respect for others and her sheer sense of humanity and of what is right and good, will be greatly missed.

Anne is a great loss to our organisation and all who had the pleasure of time with her.

The Board and staff of Hepatitis NSW extend our condolences to Anne’s partner Doug, her son and daughter, as well as her broader family. 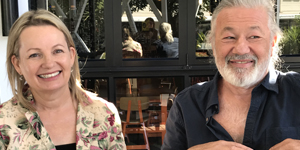 Hepatitis NSW hosted a Hepatitis C Elimination Forum in Albury on November 8. It was part of a broader campaign we ran in the area during November, to raise awareness of lifesaving treatments, and to encourage people in the community who may be living with hep C to consult with their GP about commencing treatment.

Since the introduction in 2016 of groundbreaking, highly effective hepatitis C medication, 980 people in the Murrumbidgee Local Health District (LHD) have started treatment for, and been cured of, the virus. Many lives have been saved and improved, to the greater benefit of the community. While this is a fantastic achievement, it is estimated that a further 1,400 are yet to seek treatment and cure.

The Forum’s guest speaker was The Hon Sussan Ley (MP for Farrer). When she was Commonwealth Health Minister, Ms Ley facilitated the listing of the direct acting anti-viral medication on the Pharmaceutical Benefits Scheme for all Australians over 18 years of age. Ms Ley noted in her presentation that the medications have a cure rate of 95 per cent. “They can be prescribed by any general practitioner, and cure is usually achieved within 8 or 12 weeks, with minimal or no side-effects.”

Steve (pictured right, with Sussan Ley, left) said he had been living with hepatitis C for more than twenty years before the introduction of the direct acting anti-virals gave him the opportunity to be cured. “I had been started on the old interferon treatment in 2010 but then taken off due to the severe side effects,” he said. “Fortunately, I started on the new medication in 2016 and that was a totally different story, the side-effects were very minor. My liver had been getting pretty crook before treatment but I’m cured now, my liver is healing and my energy for life returning.”

“It’s no exaggeration to say the hep C cure saved my live,” said Steve. “I would absolutely recommend the cures to anyone living with hep C.”

Ms Ley concluded her presentation by saying, “It is not often we get the chance to eliminate a chronic disease, but we have that opportunity now with hepatitis C.”

The Board of Hepatitis NSW recently put forward nominees for our first Honorary Life memberships; an award given to individual members whose exceptional, loyal, and outstanding service and contributions have a provided benefit to the organisation over an extended period of time.

Honorary Life Member is the highest recognition by Hepatitis NSW of a member, in acknowledgement of their contribution and exceptional service.

The inaugural Honorary Life Member inductees, approved by members at Hepatitis NSW’s 2019 AGM and presented on the night. The Inductees were (pictured left to right, above):

Honorary Life Members, if approved by members, are inducted each year at Hepatitis NSW’s Annual General Meetings. Nomination forms will be sent out to members prior to the next AGM. 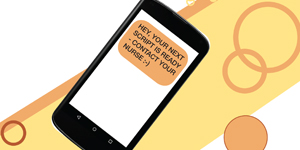 The Hepatitis NSW Hep Connect Program now offers SMS text message reminders, and peer-based telephone support calls, to anyone in the community about to commence, or already on, hep C treatment. Peer-based calls provide an opportunity to speak with someone who has been through the treatment; the SMS text messages remind clients to take their daily medication, contact their hepatology nurse for scripts, testing and results… all the way to the final test (SVR).

The Hep Connect Program works in close partnership with hepatology and clinical nurses across NSW Local Health Districts (LHDs). Nurses can offer the Hep Connect service to patients who they believe can benefit from the right type of support, at the right time, to make the journey through treatment easier. All our peers who connect with clients are trained and have lived experience with hep C treatment, and work from our Sydney office.

Since beginning operation mid-August 2019, we’ve worked with three NSW LHDs, supported six clients and three of these have completed their treatment with over 170 SMS text messages sent. Hepatology nurses have reported that the SMS text reminders and peer-based calls have greatly reduced the number of clients lost to follow-up. Clients have reported that the Hep Connect program has been instrumental in their treatment compliance and adherence.

Do you have clients about to commence hep C treatment?
We will work with you and your client to personalise the support they need.

To enrol your clients into the Hep Connect program call or email us now! 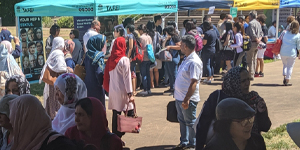 The open grassy space was buzzing with culturally and linguistically diverse students from across a range or ages. The services included: child and family counselling; community living supports for refugees and asylum seekers; hepatitis B and hepatitis C, and; drug and alcohol services. A testing van from Storr Liver Centre, Westmead Hospital, provided free health check-ups, and attracted a long queue.

The Hepatitis NSW stall was busy with queries from students regarding hepatitis B. There was great support from bi-lingual volunteers at the campus (Arabic, Farsi, Dari, Mandarin, Korean). Students benefited from hepatitis B knowledge, and were motivated to take a blood test. Most students were from high hep B prevalence countries, and 42 people received blood screening. Over 70 Hep B Quizzes were collected at the end of the day, and around 120 education resources and gifts were given out.

Our attendance at Hello Doctor was part of the community work Hepatitis NSW is doing around hepatitis B awareness raising in at-risk communities. 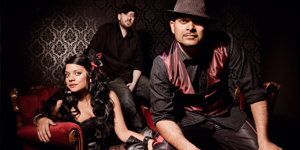 The project mirrored one delivered in 2006, at the Outer Metropolitan Multi-Purpose Correctional Centre, a minimum security facility for males. The Mary Wade project involved the production of a collaborative interpretation of the life experiences of people in custody; a population identified at high risk to exposure of hepatitis C. The goal was to create a culturally appropriate hepatitis C health promotion DVD that addressed stigma and discrimination. The project involved writing the lyrics, music, dance, and performances.

The Last Kinection is an Indigenous hip hop group, formed in 2006 by Joel Wenitong and DJ Jay Tee (both from Local Knowledge), and Naomi Wenitong (Shakaya). The band won Deadly Awards in 2009 and 2010 for outstanding achievement in R’n’B and hip hop. In 2011 they were awarded Best Band and Best Single. In 2012, The Last Kinection received the Deadly Award for “Best Band of the Year”.

Whilst initially 15 women were recruited to the project, due to it being at a remand centre, some women had been moved on, by commencement of the second stage of the project.

Overall the project proved a successful collaboration, and was well received by both participants and correctional staff.